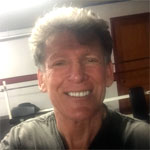 A truly free, honest and objective press is the guardian of liberty and the guarantor of equity. Without it, tyrants run amok and the masses are run to ground. With it, a strong and free people know where to direct their ire — and where to aim their fire. Without a free press, there can be no free republic.”

Carter L. Clews is the Director of Communications for Judicial Watch.

An award-winning writer, Mr. Clews was the Senior Editor for Mike Warren Sports and the Creative Director for Inphomation Communications, where he won the coveted “Infomercial Writer of the Year” award.